We Are Called to Be a Movement
A Lecture by Rev. Dr. William J. Barber II 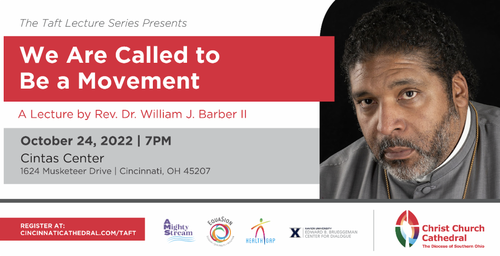 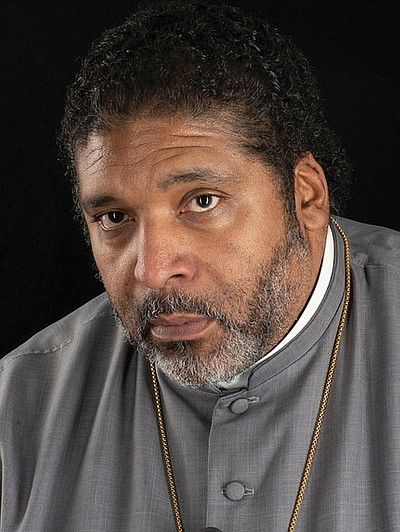 The Rev. Dr. William J. Barber II is the President & Senior Lecturer of Repairers of the Breach, Co-Chair of the Poor People’s Campaign: A National Call For Moral Revival; Bishop with The Fellowship of Affirming Ministries; Visiting Professor at Union Theological Seminary; Pastor of Greenleaf Christian Church (Disciples of Christ) in Goldsboro, North Carolina, and the author of four books: We Are Called To Be A Movement; Revive Us Again: Vision and Action in Moral Organizing; The Third Reconstruction: Moral Mondays, Fusion Politics, and The Rise of a New Justice Movement; and Forward Together: A Moral Message For The Nation.

Rev. Dr. Barber is also the architect of the Moral Movement, which began with weekly Moral Monday protests at the North Carolina General Assembly in 2013 and recently relaunched again online in August 2020 under the banner of the Poor People’s Campaign. In 2018, Rev. Dr. Barber helped relaunch the Poor People’s Campaign—which was begun by Rev. Dr. Martin Luther King Jr. in 1968—starting with a historic wave of protests in state capitals and in Washington, D.C., calling for a moral agenda and a moral budget to address the five interlocking injustices of systemic racism, systemic poverty, the war economy and militarism, ecological devastation and denial of healthcare, and the false moral narrative of Christian nationalism. There are currently 45 state coordinating committees across the country, mobilizing around the Poor People’s Jubilee Platform and We Must Do M.O.R.E. (mobilize, organize, register, and educate people for a movement that votes).

On June 20, 2020, some 2.5 million people tuned in on Facebook alone for the campaign’s Mass Poor People’s Assembly & Moral March on Washington, which originally was scheduled as an in-person event but switched to digital because of the COVID-19 pandemic. Thousands of others watched and listened on C-SPAN and other media.
A highly sought after speaker, Rev. Dr. Barber has given keynote addresses at hundreds of national and state conferences, including the 2016 Democratic National Convention. He has spoken to a wide variety of audiences including national unions, fraternities and sororities, motorcycle organizations, drug dealer redemption conferences, women’s groups, economic policy groups, voting rights advocates, LGBTQ equality and justice groups, environmental and criminal justice groups, small organizing committees of domestic workers, fast food workers, and national gatherings of Christians, Muslims, Jews, and other people of faith. On January 21, 2021, he delivered the homily for the 59th Inaugural Prayer Service for President Joe Biden and Vice President Kamala Harris. In 2017, Rev. Dr. Barber spoke at the Vatican in response to Pope Francis’s “Encyclical Letter ‘Laudato Si’ of the Holy Father Francis on Care for Our Common Home.” On June 18, 2018, Rev. Dr. Barber spoke before the 5th UNI Global Union World Congress to more than 25 countries, during which time he was added to the Black Achievers Wall in the International Slavery Museum in Liverpool, England.

Rev. Dr. Barber served as president of the North Carolina NAACP, the largest state conference in the South, from 2006-2017 and served on the National NAACP Board of Directors from 2008-2020. A former Mel King Fellow at MIT, he is currently Visiting Professor of Public Theology and Activism at Union Theological Seminary and is a Senior Fellow at Auburn Seminary. Rev. Dr. Barber is regularly featured in media outlets such as MSNBC, CNN, the New York Times, Washington Post, and The Nation magazine, among others. Rev. Dr. Barber was named one of 2020’s BET 100 Entertainers and Innovators, as a Social Justice Warrior, and he is one of the 2019 recipients of the North Carolina Award, the state’s highest civilian honor. He is a 2018 MacArthur Foundation Genius Award recipient, as well as a 2015 recipient of the Franklin D. Roosevelt Four Freedoms Award and the Puffin Award. Rev. Dr. Barber has had ten honorary degrees conferred upon him.
Learn More