A cathedral for the city with a heart of a parish.

Christ Church Cathedral is the cathedral for the Diocese of Southern Ohio and the beautiful city of Cincinnati.  As the Cathedral, we endeavor to serve God and our neighbor, be a center for justice and the arts, and a trusted place of refuge for the community.

Christ Church Cathedral has an over 200-year history of being a parish in Downtown Cincinnati. We are a vibrant Episcopal church community endeavoring to live out the way of love - the way of Jesus -  and faithfully respond to the needs of Cincinnati.

Christ Church was founded in 1817 by then missionary Rev. (future Bishop and Presiding Bishop) Philander Chase, and prominent early settlers of Cincinnati including William Henry Harrison (who became ninth President of the United States) and Dr. Daniel Drake.[2] In 1820, the church was formally incorporated in the State of Ohio; the first building was on East Sixth Street.

In 1835, the church moved to its present location at 318 East Fourth Street. The red-brick structure of 1835 was modeled after the old Stepney church St. Dunstan's in London.[3]
The Gothic Revival-style Parish House was built in 1907, which today provides office space, rooms for classes and meetings, a gymnasium, the cathedral library and the cathedral shop.
The Centennial Chapel, located north of the present cathedral, was erected in 1917 to commemorate the church's centennial anniversary, and provides a setting for smaller worship services and concerts as well as a still space for individual prayer and meditation. It may have been designed by prominent Cincinnati architect Frederick W. Garber's firm.

The 1835 building, deemed unsafe, was replaced in 1957 with the current building, designed in a bold modern style by David Briggs Maxfield. Although it incorporates features such as the stained glass windows from the original church erected in 1835, the building is in stark contrast to the older buildings in the cathedral complex. It was extensively remodeled in the 1980s and then again in the 1990s.

On Palm Sunday 1993, Christ Church was consecrated the cathedral of the Episcopal Diocese of Southern Ohio, succeeding the former St. Paul Episcopal Cathedral, Cincinnati. The following year, the largest renovation project in the history of Christ Church began, involving the church and the entire church complex, and the cathedral was rededicated in 1998.

Christ Church continues its history of service to the community that extends back two centuries.

In 2021, the Very Reverend Owen C. Thompson became the first African American dean of the Cathedral. That same year, a Richard, Fowkes & Co. Opus 24 organ was installed in the Cathedral at the back the Cathedral's sanctuary.

When you visit the Cathedral, we encourage you to experience Christ Church Cathedral across two hundred years of history, and counting, in the north corridor.

In honor of Christ Church Cathedral's bicentennial, faithful church members, Ruth Bamberger and Suzann Parker Leist, spent 18 months researching, writing, and organizing the timeline, which was created by Welch Sign of Scarborough, Maine. &nbsp;The timeline is organized into twenty-five-year periods that tell the story of &nbsp;(1) The Episcopal Church and our worship; (2) our membership community; (3) our ministries and whom we serve; and (4) our integration into the life of a growing city on the Ohio River. The text, photos, and design of the primary timeline trace this evolution across nine panels. A two-part secondary timeline provides context for our story. Economic and political events, social change, and advances in knowledge in each period have influenced our membership and our mission in the Cincinnati/Northern Kentucky region. &nbsp;

The timeline reveals other moments in church history that impacted the city:
And a Cathedral favorite, “1906-13: Church men’s basketball team defeats the University of Kentucky team four times.”

The timeline is a great resource not only to learn about the Cathedral but also our city.&nbsp;
Download PDF of Timeline 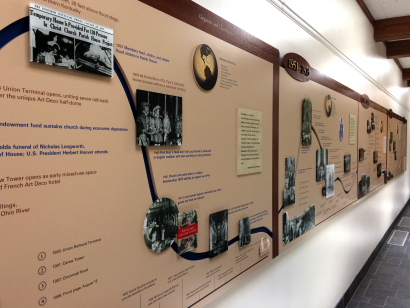 Want more information about the Cathedral?

We'd love to hear from you. Please fill out the form below and our team will respond.